Since appium server is written in node.js, first node.js needs to be installed. Following this appium can be installed from npm -

DON’T install node js using above method, it would result in following error when starting appium -
error: Appium will not work if used or installed with sudo. Please rerun/install as a non-root user. If you had to install Appium using `sudo npm install -g appium`, the solution is to reinstall Node using a method (Homebrew, for example) that doesn't require sudo to install global npm packages.

appium is installed in bin folder and updating path would let you execute appium from command line as described later -
refresh bashrc so you don’t have to logout and login -
source ~/.bashrc
npm install -g appium
{appium installation looks as following on my ubuntu -
/home/tarun/node-v0.12.2-linux-x64/bin}
cd /home/tarun/node-v0.12.2-linux-x64/bin
./appium
If everything goes right then you would have appium server up and running as following
info: Welcome to Appium v1.3.7 (REV 72fbfaa116d3d9f6a862600ee99cf02f6d0e2182)
info: Appium REST http interface listener started on 0.0.0.0:4723
info: Console LogLevel: debug


Unpack the .zip file you've downloaded. The SDK files are downloaded separately to a user-specified directory


By default, Android SDK does not include everything required to start development. The SDK separates tools, platforms, and other components into packages that can be downloaded as needed using the Android SDK Manager. Hence we must first download a few packages and add to Android SDK.
Open a terminal and navigate to the tools/ directory in the location where the Android SDK was installed, then execute android sdk.
For ex it looks as following on my ubuntu -
cd /Documents/mine/lib/android-sdk-linux/tools$
./android &

3. Get the support library for additional APIs
The Android Support Library provides an extended set of APIs that are compatible with most versions of Android.
Open the Extras directory and select:

Select Target, CPU/ABI, Skin and click ok to set up new virtual device. When you click Ok then device would be listed under “Android Virtual Devices” tab -


Finally, set $ANDROID_HOME to be your Android SDK path. This looks as following on my ubuntu -
Install Android Debug Bridge (adb) -
Execute following command to install adb on Ubuntu -

and following for mac -

Android Debug Bridge (adb) is a command line tool that lets you communicate with an emulator or android device. It is a client-server program and includes three components:
adb devices
Refer ADB for more on this topic.

You can find the adb tool in <sdk>/platform-tools/ directory. It is available on following directory on my linux - /home/tarun/Documents/mine/lib/android-sdk-linux/platform-tools


Appium inspector does not work very well with android. Appium encourages to use uiautomatorviewer. An inspector tool from Google which is same as Appium inspector. You can find information on this here

This would start UiAutomatorViewer as - 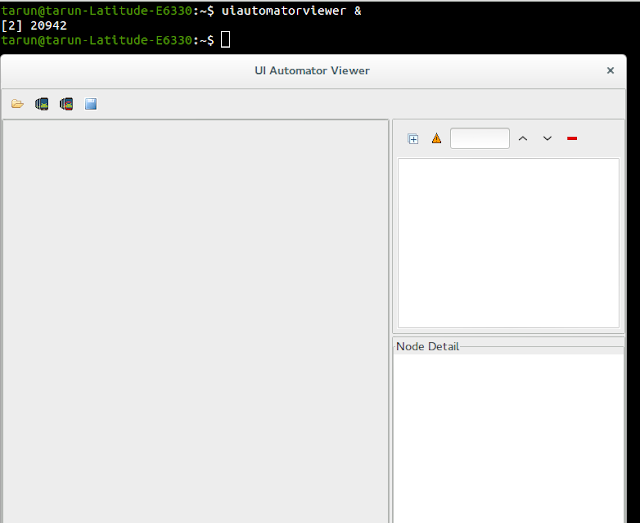 Now open the app (for example calculator) in emulator or device and click on Device Screenshot (uiautomator dump) in the UIAutomatorViewer menu.
Following this you would see the snapshot of application in UIAutomatorViewer as - 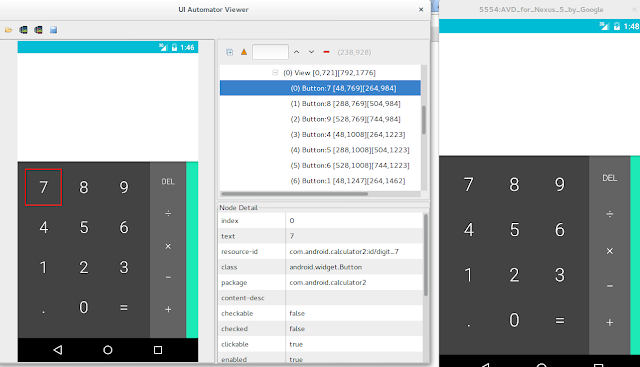 Now you can analyze the app element by hovering mouse on them. Mousehover would highlight the element in red circle in UIAutomatorViewer and would detail down the hierarchy in RHS.

June 17, 2011
Note: If you are new to java and selenium then start with selenium java training videos .   I must confess I have never been admirer of Regular Expression but then there are times you can not escape from it, especially while working on a website which has dynamic contents appeared in static text and you want to validate it. like - "Validate that this text appears and there is 123 here and 456 here" And the test condition is 123 and 456 could be any three digits but number if digits should not be more than three. In a crude way we can at least test this - Assert.assertTrue(selenium.getText("elementLocator").contains("Validate that this text appears and there is")); but what if text goes wrong after "and there is"... what if more than 3 digits appear in text. This is where pattern matching/regular expression comes for our rescue and we can use matches method of String class to achieve same. So the assertion would be - String text =
Read more

August 02, 2011
Note: If you are new to java and selenium then start with selenium java training videos .     Email confirmation seems to be integral part of any registration process. I came across an application which lets you provide your email address. You can follow the sign up link in you mail and then complete the registration process. Lets consider we provide GMail address for it. Now if were to use only Selenium then we would have to follow following steps - Launch GMail using Selenium; Some how search for new mail in the list of available mails; Some how click on it; Parse the mail message; Get the registration link; Follow up with registration process What do you think of an approach in which you can
14 comments
Read more