May 01, 2011
Not long ago when Dave proposed to have dedicated Selenium site on Stack Exchange. And proposal was badly stuck at 70% and when few us of decided to ask more and more selenium users to commit to it to make it see day of light -

After weeks of commit and persuading user we reached 92% commit but then. Well Stack Overflow did not like the ides of having a dedicated selenium site and proposed to merge it with another software testing proposal on Stack Exchange, Which was largely looked down upon at by Selenium Community.


There was great dissent from Selenium users but as ill luck would have it, Stack OverFlow decided to close Selenium proposal and merge it Software Testing proposal.

Well, we were not ready to give up easily and filed one question here. 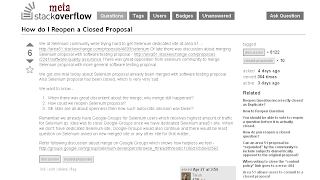 N.B. I had stopped  blogging and wanted to keep my post on area51 proposal on top so that any visitor would know and probably commit to Selenium site. Alas