Appium app provides ready to run version of appium server. Install appium client and start appium server as described in following steps -
Install latest Appium client for ios from - http://appium.io/downloads.html (You may have issues downloading this file from chrome, FF seems to work without issues)
Once download is over then Control-click appium.dmg > open with > DiskImageMounter.app
DMG is a apple disk image. The disk image will be mounted. 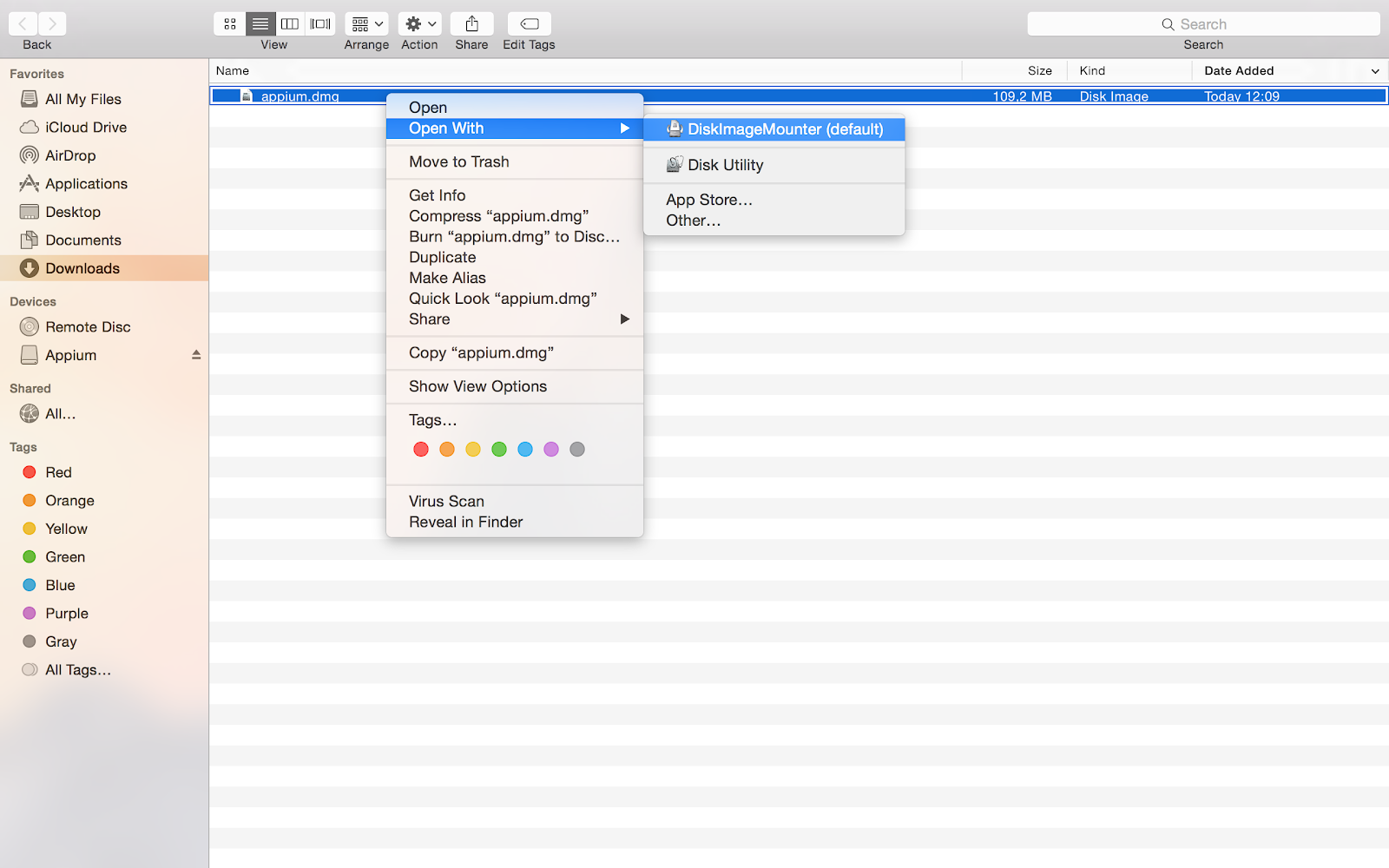 Then look for the mounted disk image in your finder (cmd + space), It will appear there. Right click and open. You should also drag it to Applications folder so that you can search it in finder (command + tab) in future. 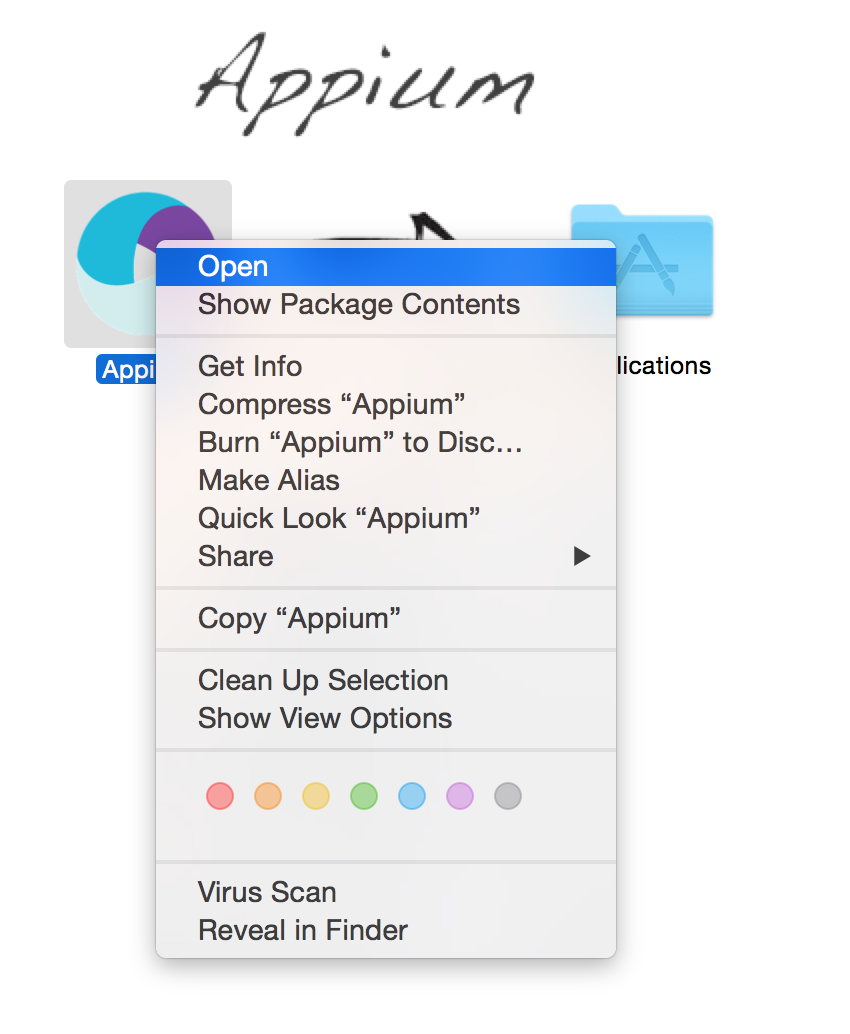 After app verification you will see a warning > Click Open 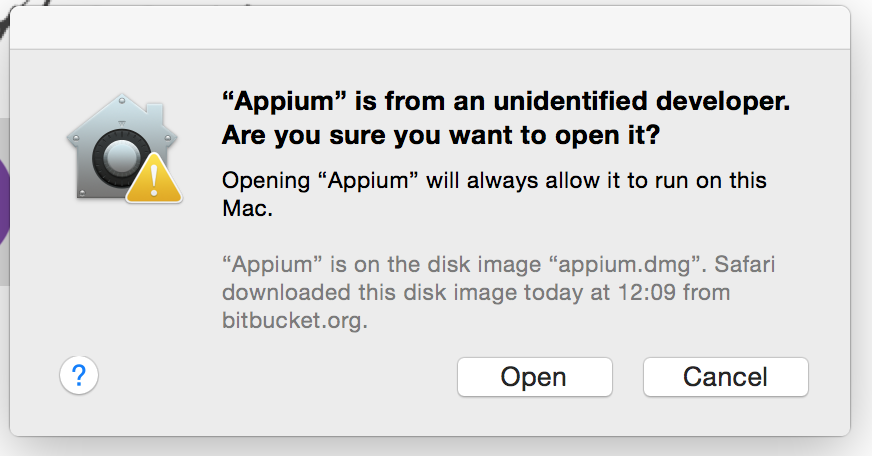 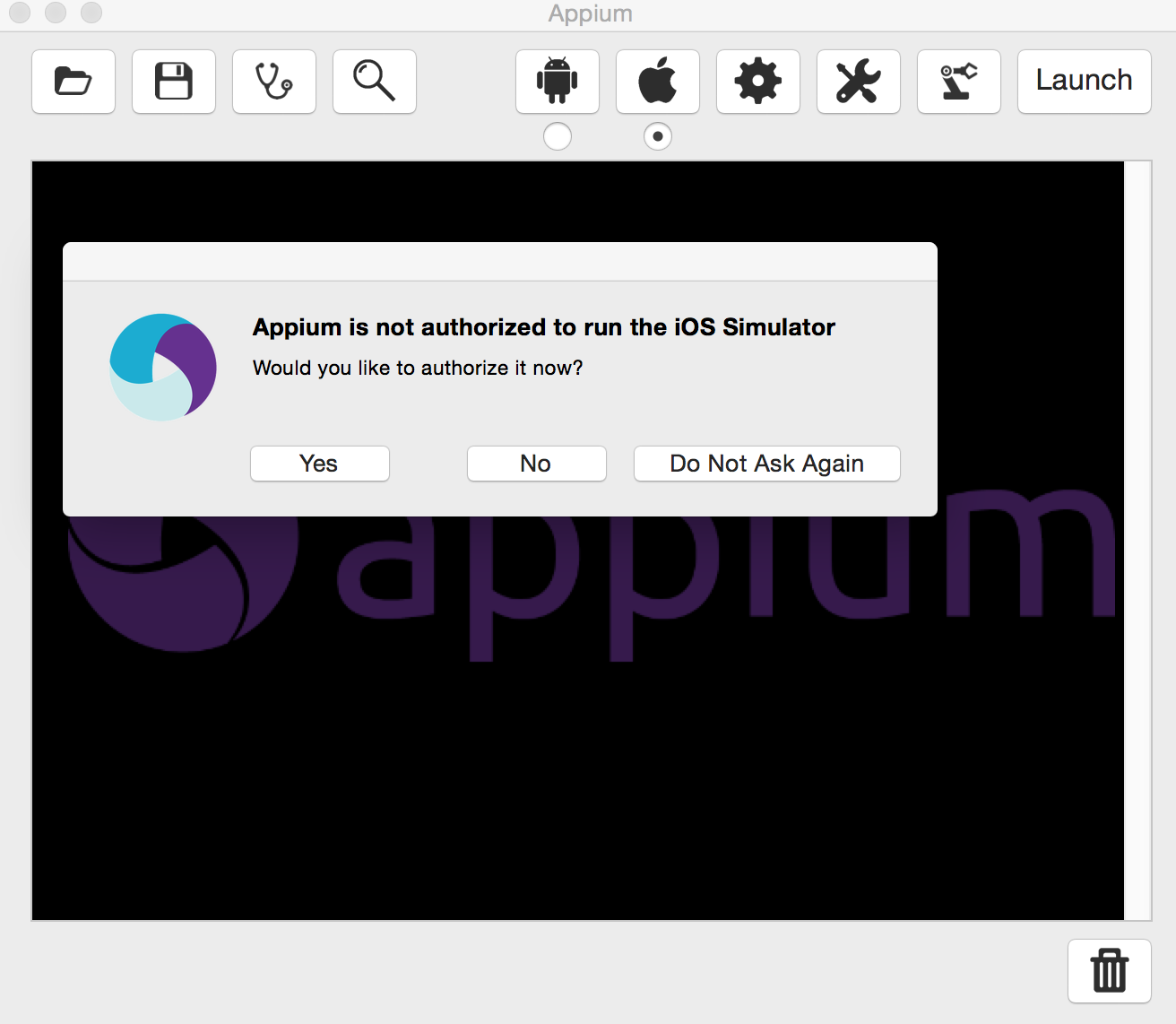 Click the Launch button to launch appium inspector. If everything goes ok then you should see Welcome message 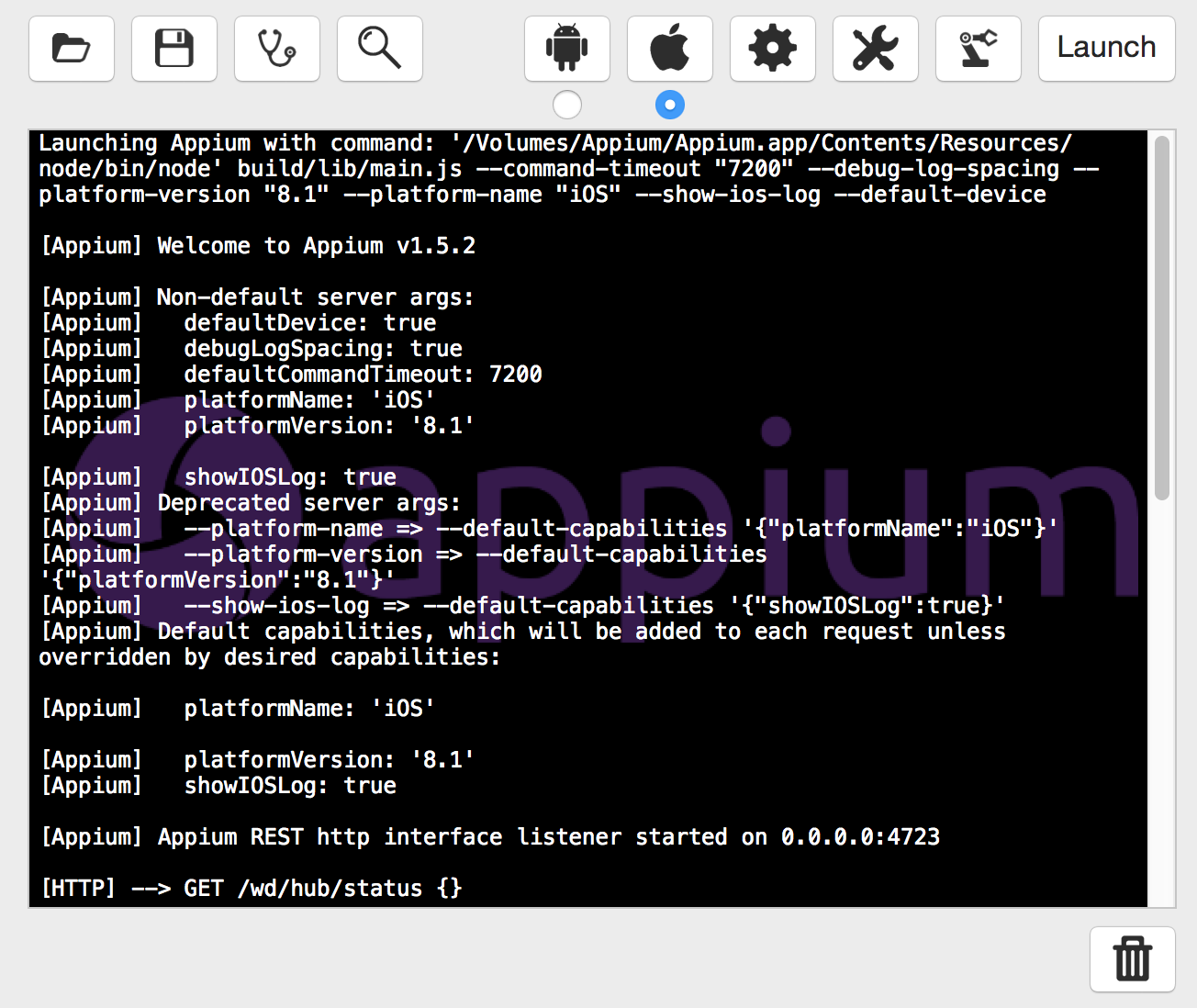 Once you launch an app on emulator then you can click on magnifying glass (appium inspector) to verify application elements. 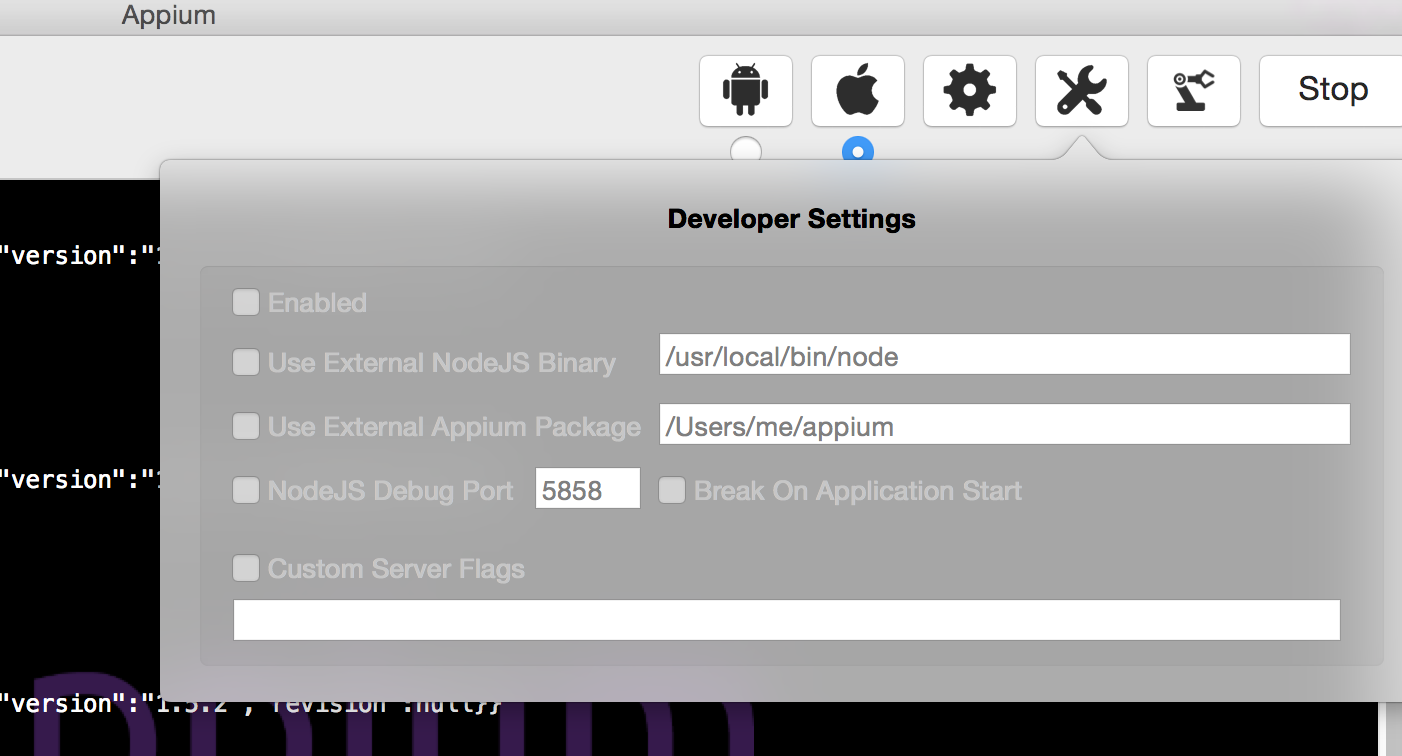 Now we need to install Xcode for OSx
Install Xcode 6.0.0 (or higher) from the App Store. From wikipedia - Xcode is an integrated development environment (IDE) containing a suite of software development tools developed by Apple for developing software for OS X, iOS, WatchOS and tvOS. You could refer Xcode beginners guide to get a gist of Xcode.

If you use xCode version lower than 6.0.0 then you would encounter following error when running test -

org.openqa.selenium.WebDriverException: An unknown server-side error occurred while processing the command. Original error: Tried to use an iOS simulator with xcode version 5.1.1 but only Xcode version 6.0.0 and up are supported (WARNING: The server did not provide any stacktrace information)

Refer the apple simulator user guide to get very detailed info on simulator. You may be specifically interested in how to change simulated device and OS version to be able to test app/web on different versions of device and OS.

Assuming that Xcode is installed, you can launch ios simulator as following - 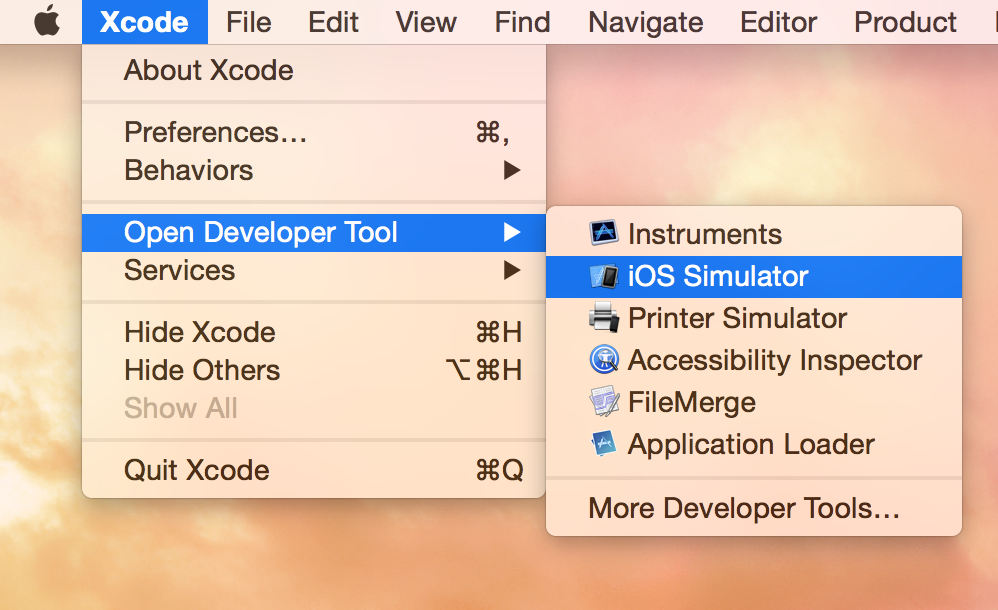 To Download other versions of iOS simulator, select Xcode > Preferences > Downloads and select the ios Simulator you want to download - 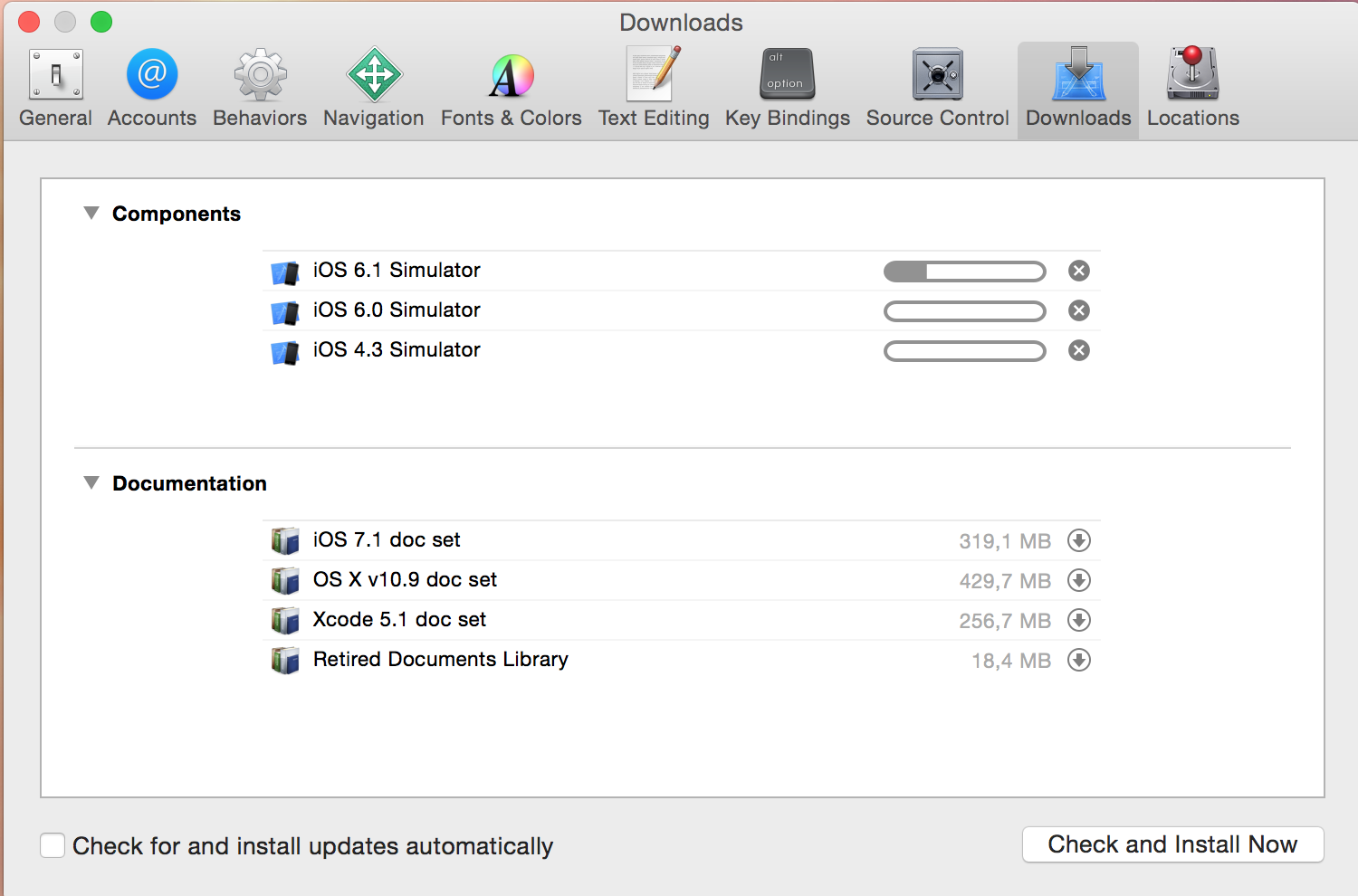 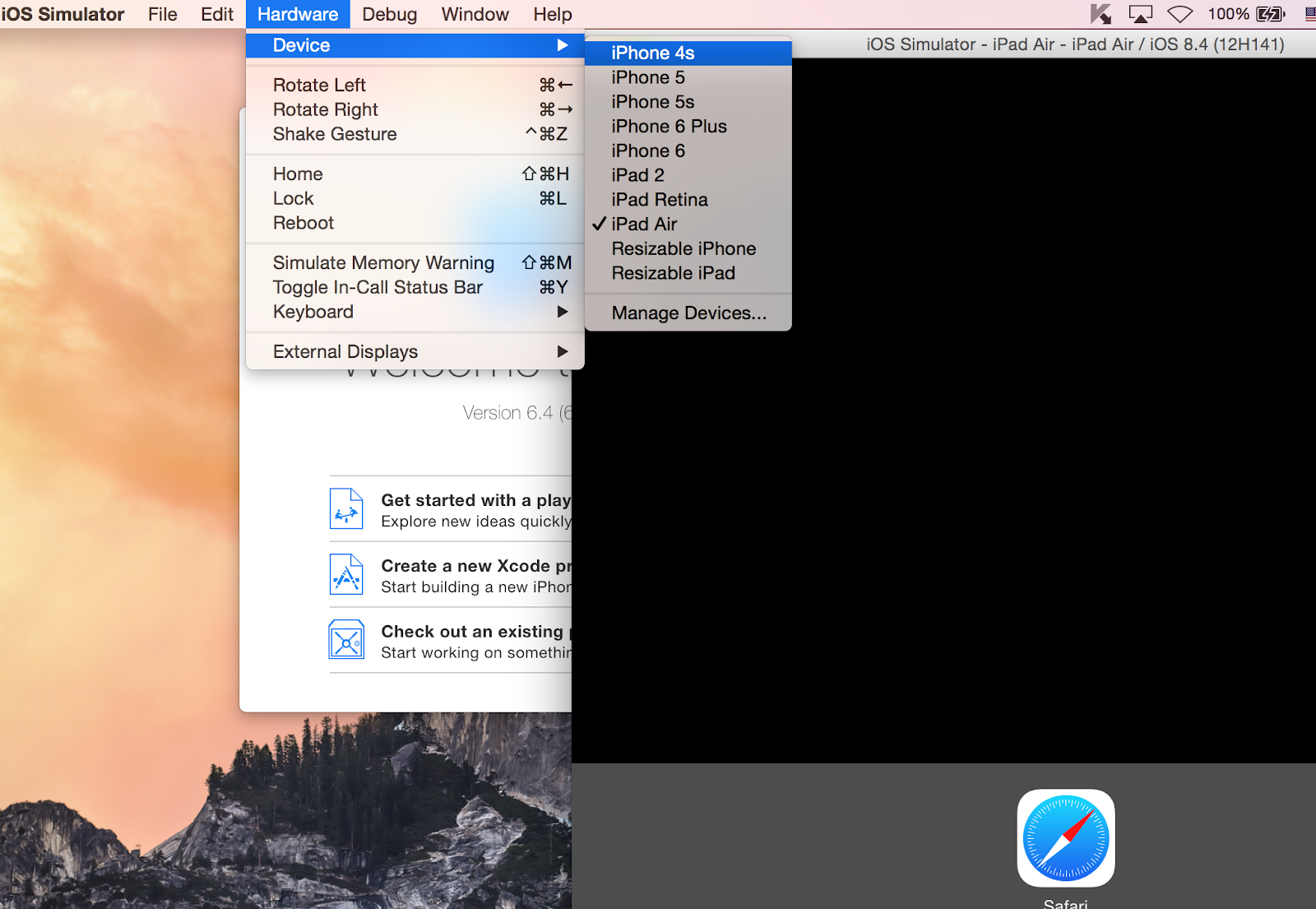 Now head over to testng.xml to execute ios web test :)

June 17, 2011
Note: If you are new to java and selenium then start with selenium java training videos .   I must confess I have never been admirer of Regular Expression but then there are times you can not escape from it, especially while working on a website which has dynamic contents appeared in static text and you want to validate it. like - "Validate that this text appears and there is 123 here and 456 here" And the test condition is 123 and 456 could be any three digits but number if digits should not be more than three. In a crude way we can at least test this - Assert.assertTrue(selenium.getText("elementLocator").contains("Validate that this text appears and there is")); but what if text goes wrong after "and there is"... what if more than 3 digits appear in text. This is where pattern matching/regular expression comes for our rescue and we can use matches method of String class to achieve same. So the assertion would be - String text =
Read more

August 02, 2011
Note: If you are new to java and selenium then start with selenium java training videos .     Email confirmation seems to be integral part of any registration process. I came across an application which lets you provide your email address. You can follow the sign up link in you mail and then complete the registration process. Lets consider we provide GMail address for it. Now if were to use only Selenium then we would have to follow following steps - Launch GMail using Selenium; Some how search for new mail in the list of available mails; Some how click on it; Parse the mail message; Get the registration link; Follow up with registration process What do you think of an approach in which you can
14 comments
Read more